Insure Our Future Scorecard 2020. Insurers’ retreat from coal sends premiums soaring but industry fails to act on oil and gas Although momentum is growing, it falls short of what is needed to drive action to meet international climate targets. Major companies in the U.S., the Lloyd’s market and East Asia are still insuring coal, and the global insurance industry has so far failed to take comprehensive action on oil and gas.

Most European and Australian insurers no longer provide cover for new coal projects, while others are becoming more cautious and restricting capacity. Coal companies are facing rate increases of up to 40%, according to broker Willis Towers Watson. Controversial projects – like the Adani Group’s planned Carmichael coal mine in Australia – are finding it hard to obtain insurance cover at all.

The insurance industry has a unique power to drive the transition to a low-carbon economy by only insuring projects that are consistent with limiting global warming to 1.5°C. Insuring Our Future: The 2020 Scorecard on Insurance, Fossil Fuels and Climate Change reports on its actions and is published by 19 organisations from 11 countries and will be launched today at the virtual Insurance, Risk and Capital EMEA conference.

Since the Insure Our Future campaign launched in 2017, at least 23 companies have ended or limited their cover for coal projects, representing 12.9% of the primary insurance market and 48.3% of the reinsurance market.

Insurers are also divesting from coal: at least 65 insurers with combined investments worth $12 trillion — likely to be more than 40% of the industry’s total assets — have either adopted a divestment policy or committed to making no new coal investments. This is up from $4 trillion in 2017.

Peter Bosshard, Coordinator of the Insure Our Future campaign, says: “Insurers’ continuing shift away from fossil fuels is positive, but in the face of a worsening climate crisis it needs to accelerate. Laggards like Lloyd’s, AIG and Tokio Marine must stop insuring coal now, and all insurers need to phase out support for the oil and gas industry.”

Global broker Willis Towers Watson reports that even insurers who continue to cover coal are becoming more cautious after many years of losses and are reducing capacity. “The extent of an Insured’s coal-related operations is becoming an increasingly dominant factor in determining whether insurers will provide cover,” it adds.

For the first time, this year’s scorecard evaluates insurers’ commitments on oil and gas as well as coal. Just nine insurers have limited or ended cover for tar sands oil – up from four last year – and Australia’s Suncorp is the first and only company to announce a phase-out of all oil and gas coverage.

Burning coal is responsible for 40% of CO2 emissions not related to land use, but oil and gas combined are responsible for 55%, and building any new fossil fuel projects is not consistent with a 1.5°C pathway., The shrinking coal market demonstrates the impact insurers can have on fossil fuel development, and the highly concentrated oil and gas insurance sector is vulnerable.

Ten insurers cover about 70% of the global oil and gas market, the biggest being AIG, Travelers, Zurich and Lloyd’s. However, companies controlling 45% of the market have already moved away from coal, and a quarter of the market is provided by insurers that back a 1.5°C climate target.

Lucie Pinson, Executive Director of Reclaim Finance, says: “European insurers have led the industry’s retreat from coal and now they must step up and lead action on oil and gas. Allianz, AXA, Munich Re and Zurich have pledged to align their investment portfolios with 1.5°C, and if they are serious about this target they must stop insuring and investing in companies which plan new oil and gas production.”

Leaders and laggards: U.S. and Asian insurers, along with Lloyd’s market, fail to act

This year’s scorecard reveals that momentum is growing globally but with big regional differences. U.S. insurers continue to lag behind their global peers. Liberty Mutual and The Hartford restricted coal insurance in the last year, following Chubb and AXIS Capital, but their policies are significantly weaker than those of leading European insurers. AIG, Berkshire Hathaway, Travelers and other U.S. insurers have not taken any action on fossil fuels at all. All 10 U.S. insurers in the scorecard continue to support organisations lobbying against climate action.

The East Asian market is slowly starting to move. Last month, Samsung Fire & Marine announced it will stop insuring coal – the first Asian insurer to do so – although details have yet to follow. Japan’s three major insurers - Tokio Marine, Sompo and MS&AD – and China’s Ping An have announced very basic restrictions on underwriting, but they continue to be major insurers of coal.

In Europe, Lloyd’s of London is the last major insurer to continue underwriting coal. It has divested coal from its own central fund but given no direction to the 90-plus syndicates that make up 97% of its market, and it remains a major source of coal insurance.

Flora Rebello Arduini, Senior Campaigner Consultant, SumOfUs, says: “Lloyd’s of London and its members insure and invest in some of the world’s worst fossil fuel projects. While its European counterparts have led the way on climate action and withdrawn from coal, Lloyd’s has stepped in to provide insurance that no one else will. There is no pride in being the insurer of last resort for a dying and destructive industry, Lloyd’s must stop its legacy of climate destruction.”

The scorecard report ranks 30 leading insurers, collectively assessing and scoring their policies on underwriting and investing in fossil fuels. It is based on responses to a survey from 20 companies and on publicly available information. It finds that:

[Scoring grid on next page has changed as a result of Samsung’s new policy.] 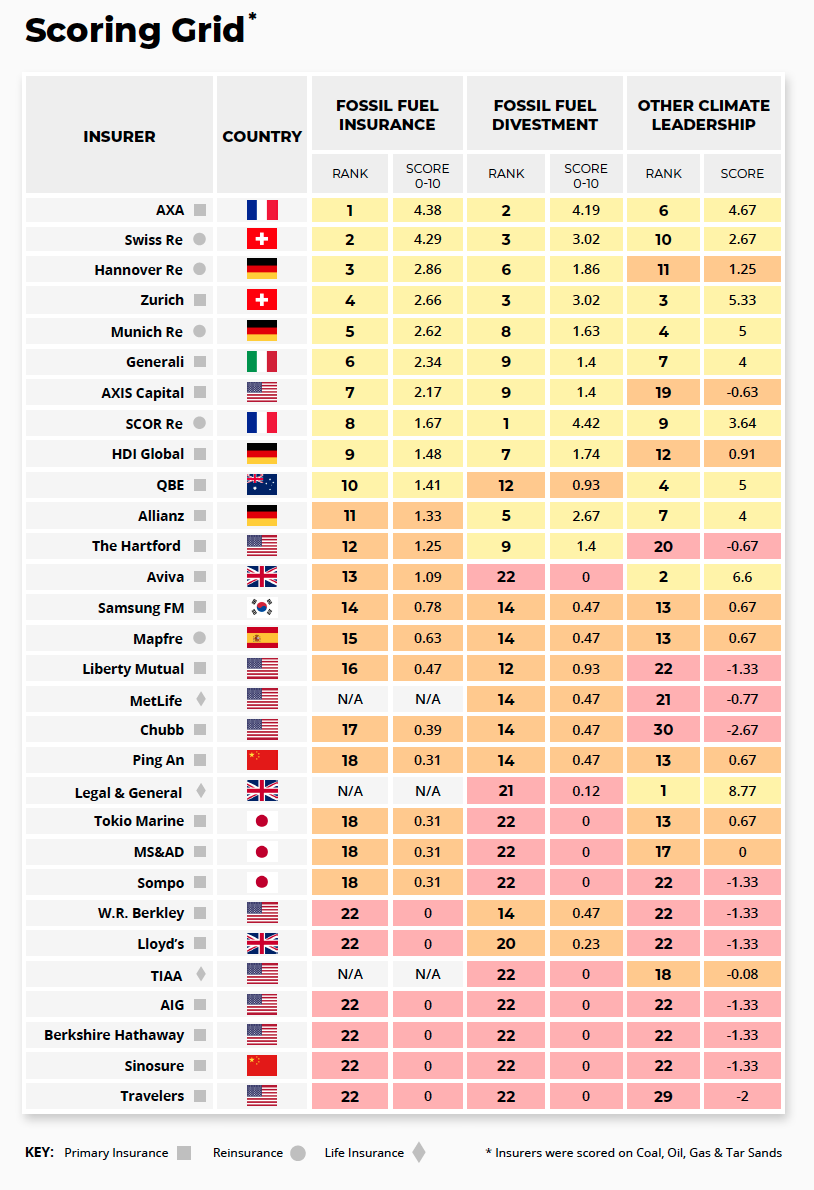 About Insure Our Future

You can find the scorecard microsite here: insurance-scorecard.com